I was super-lucky to win a raffle that Pilvi had in her blog How to become an emigrant. I had no idea what to expect, since this was a surprise prize and I was so excited when I opened the package and found these: 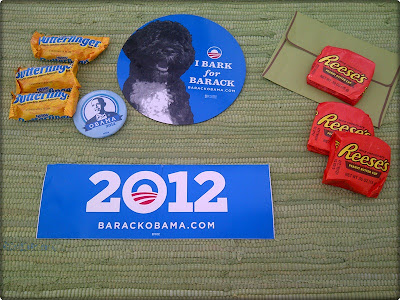 My husband ate most of the candy right away and I absolutely loved the Bo-magnet! It has an honorary spot on our fridge door :) Thank you Pilvi!

I'm probably not going to discuss much U.S politics in this blog, at least while I'm not in the U.S, but I think it's a fair assumption that I'm not a big fan of GOP. I have many issues with the Republican party, but my main problem with them is that they are not an equality party and I'm very much a pro-equality person. This and other issues would prevent me from ever voting for such a party as GOP. It is fair to say that if I had to make the choice, I'd be a Democrat.

Hope everyone is having an amazing weekend!

You're very welcome! I'm so glad you liked the little package I put together! And it got there in as many pieces as it left here. :D

I really really liked it, thank you so much! :)