“OMG, I thought you were a total bitch when I first met you!”

So I had a revelation the other day; I suffer from CBF, chronic bitchface. This revelation was brought to me by Buzzfeed's "22 Problems All People With Resting Bitchface Will Understand." I don't in particular like to use the word bitch in this context, but this just hit so close to home I'm just going to accept the term bitchface.
I consider myself a happy person and I believe people who know me do so as well. I laugh a lot and talk a lot, maybe even too much. I almost never get mad, just sad sometimes. But then there's a bunch of people who get the first impression that I'm a "major bitch" without me even saying a single word! Countless times I've hear people say "When I first met you, I though you were a total bitch, but now that I've gotten to know you I know you're not." I've been asked several times what's bugging me, when I'm just deep in thought thinking about, not cookies, but for example some upcoming happy event. I've come to the conclusion I have in fact a resting bitchface, since I certainly don't talk or sound like negative person.
The other day I was taking copies of my passport's biographical page for the spousal visa and realized I even have a resting bitchface in my passport photo! It kinda looks like I'm looking down on whoever is checking my photo :D That made me really self-concious so I checked out a bunch of other photos of me on Facebook. I thought I looked non-bitchy in those at least :D
Maybe this is just cause I'm Finnish and don't have a shiny white, straight set of teeth and sometimes smile without showing my non-pearlywhites? Anyhows, I don't plan on analyzing my resting bitchface too much, just know dear readers, that I really am a nice, friendly person :D

Photo from here
Wishing everyone who celebrates it a very happy Vappu!
I know I'll be smiling today :)

Lähettänyt Sugar osoitteessa 4:15 AM No comments: 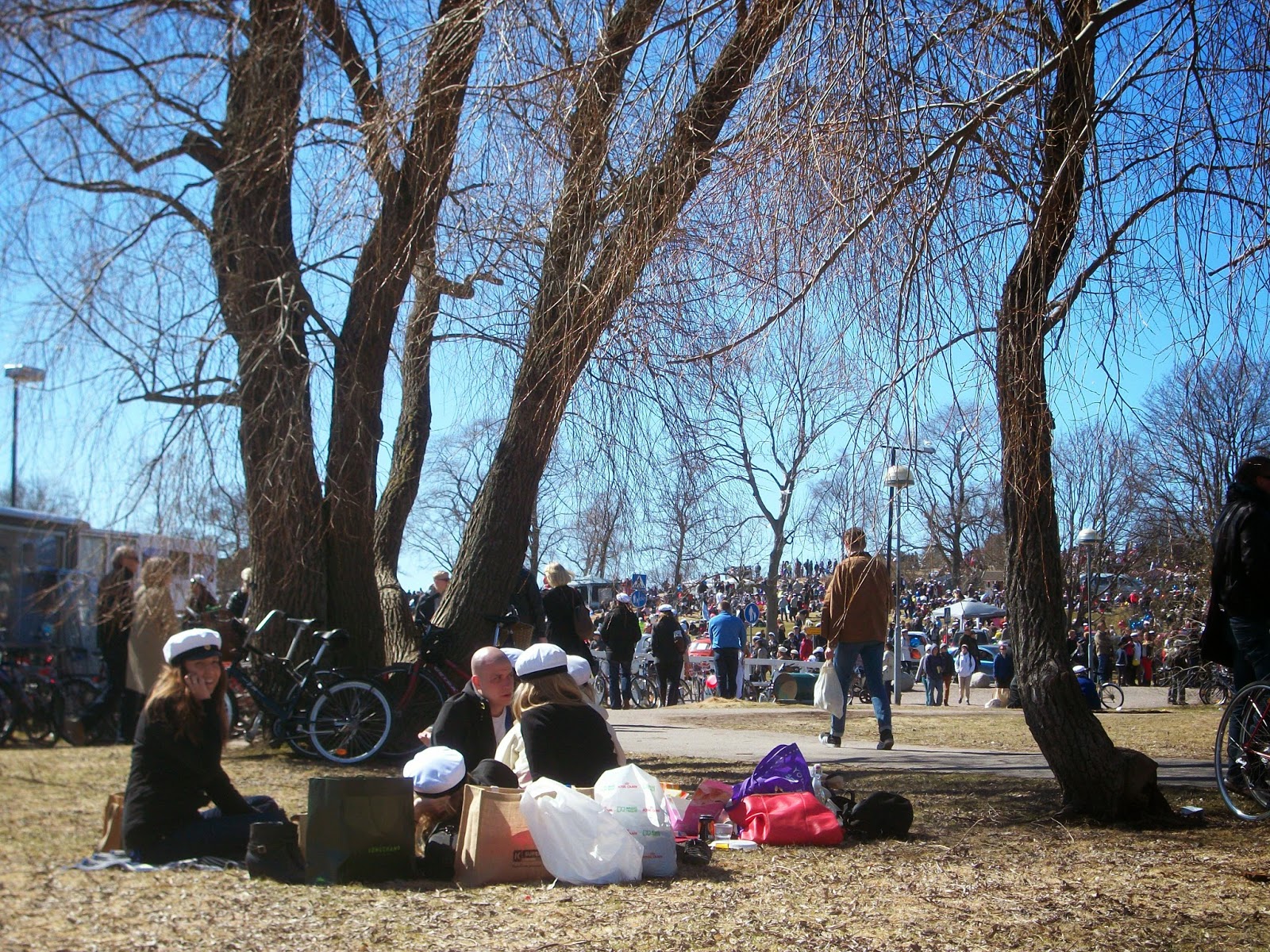 Vappu-picnic at Kaivopuisto Park in Helsinki, Finland in 2012. 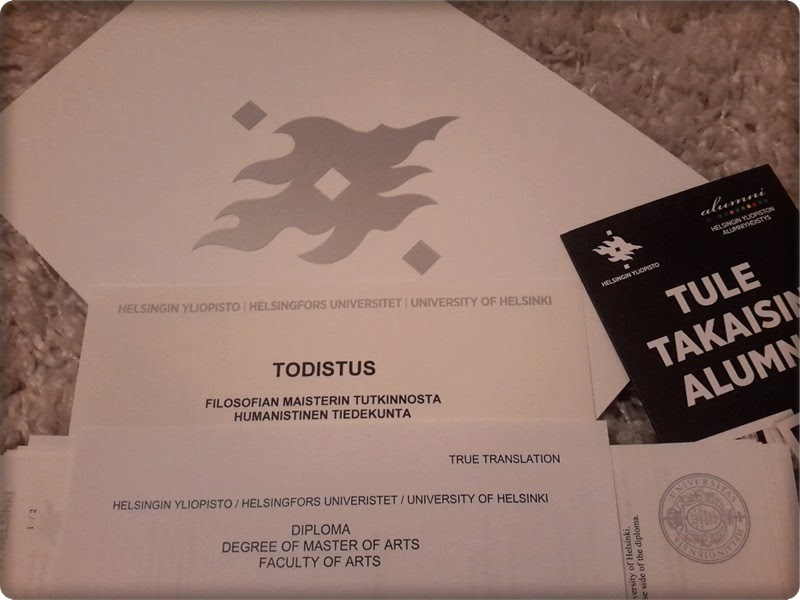 Today is a less random Tuesday on Random Tuesdays :)
Two awesome things have happened. First I went to pick up my diploma from the university, yay! Then I went to work and our CEO announced that I will be promoted to a manager position, double yay!
So it's been a rather spiffin' Random Tuesday ;)

After 11 months of waiting, we have reached the second part of our immigration journey. Not a whole lot has happened in almost a year, but now begins the most complicated part of the process.

Step # 1 was sending the  I-130 Packet to USCIS, which was approved (NOA2) after 10 months of waiting.
Step #2 consists of dealing with the National Visa Center (NVC), where USCIS sent our case. This part of the process consists of multiple phases.

1) After receiving NOA2 we began calling NVC about once a week to inquire if they had received our case. They received the case from USCIS two weeks after NOA2.

2) After NVC had received our case we continued calling NVC about once a week to find out whether a case  number and invoice identification number had been given. It took them a month to get us the case number. Once we got the numbers, we also gave NVC our email addresses, so that they will email us if they need something (checklists).

3) Here's where we are now: waiting for the online form DS-261 (choosing an agent, filled by beneficiary/future immigrant, in other words me) to be available. Once I've filled it out, I have to print the confirmation page in the end to bring it to the future interview.

4) Next up is paying the AOS (Affidavit of Support) and IV (Immigrant Visa) bills through an online portal. You need to have a U.S bank account to do this and have to just keep checking the portal for the bills to show up there.

5) After AOS bill shows paid, the petitioner (husband) can print a bar coded cover sheet for the AOS package and can go ahead and send the said package. The AOS package consists of

-the cover sheet with bar code
-cover letter (where the petitioner lists and explains all the documents included)
-Filled out, signed, and dated form I-864 (filled by the petitioner)
-Tax information of the petitioner (last three years of IRS transcripts). Since husband is missing one transcript, he will substitute this with a letter explaining that he wasn't required to file that year, since he didn't make enough money.
-Petitioner's letter of employment or a couple pay stubs. Since husband's job in Finland is not likely to continue in the U.S, he will add a letter here explaining that his employment won't continue in the U.S. Because of this, we are required to have a joint sponsor (mother-in-law), who will add the following documents to the AOS package:

-Filled out, signed, and dated I-864 form by the joint sponsor
-Tax information of the joint sponsor (last three years of IRS transcripts)
- Proof of US citizenship/residency of joint sponsor, a copy of birth certificate or copy of passport bio-data page
- Joint sponsor's letter of employment and a couple pay stubs
- letter of intent to re-establish domicile in the U.S, written by the petitioner (husband), since he is currently residing abroad, and evidence to support the intent. Evidence will consist of the following documents: U.S bank account information showing an U.S address, copy of a current U.S driver's license showing the same address, letter proving that housing arraignments have been made, quote from a cargo company to ship our stuff to the U.S, quote from a local U.S car dealership about purchasing a car and copy of a temporary Finnish residence permit, showing that the residency in Finland was temporary.

6) After the IV bill shows paid, the beneficiary (me!) can print a bar coded cover sheet for the IV package and can go ahead and send the said package. The IV package consists of:
-Bar-coded cover sheet from payment portal
-Cover letter listing and explaining the attached documents
-Two U.S sized passport photos (2" x 2") of beneficiary with beneficiary's full name, date of birth, and case number written on the back
-Copy of bio-data page of beneficiary's current passport
-Beneficiary's birth certificate (long form Vaestorekisteriote from Maistraatti, which has parents names in English) and a photocopy of that
-Marriage certificate (also from Maistraatti in English) and a photocopy of that
-Original police certificate (Rikosrekisteriote, can be ordered by email from Oikeusrekisterikeskus). The beneficiary will need one from every country they have lived for at least a year in.

7) After the IV bill shows paid, the beneficiary (me!) will also have to fill an online form DS-260. Once I've filled it out, I have to print the confirmation page in the end to bring it to the future interview.

8) Once both packages have been sent and online form filled, we start calling NVC again to hear if  they've received the packages and if we've gotten checklists (if there's been mistakes, we forgot something) or have completed the case.

9) We wait for NVC to email us a interview date. 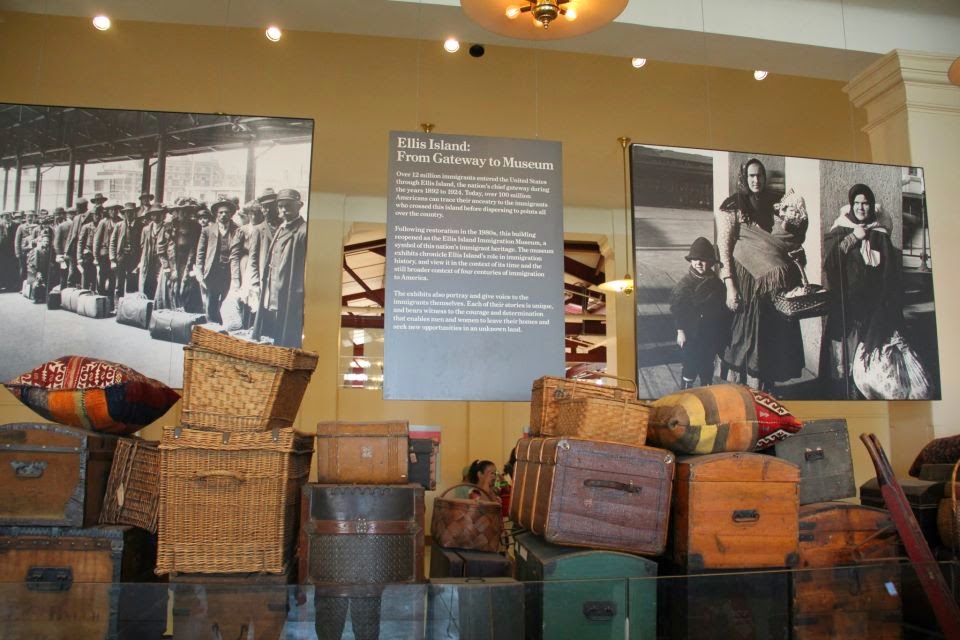 Ellis Island, NY in 2012.
My great-great-grandparents immigrated before the Immigrant Inspection Station
was opened, so they never went through it.

Hope everyone is having a wonderful Easter time! :)

Lähettänyt Sugar osoitteessa 9:46 AM No comments: 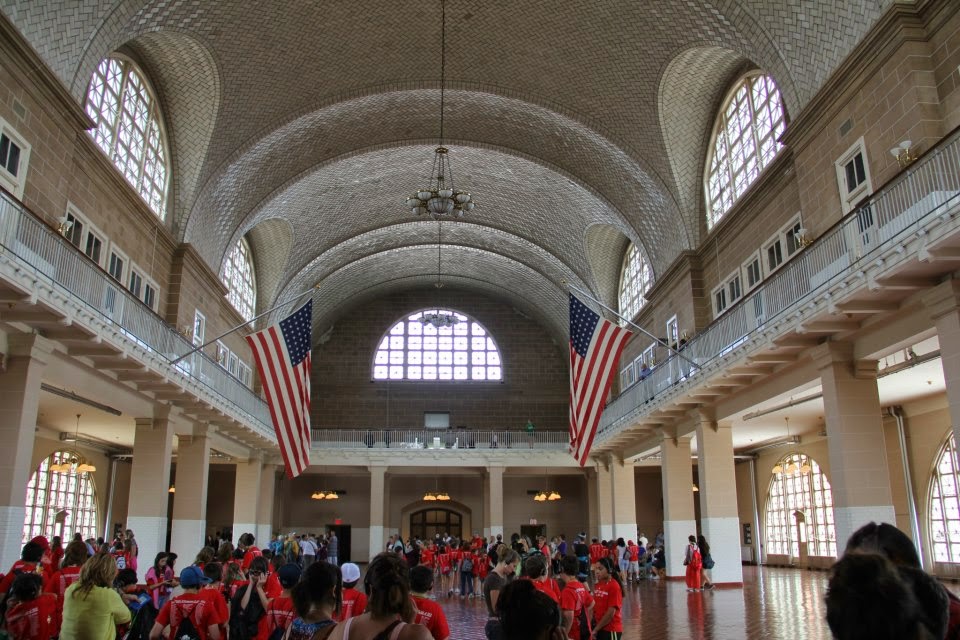 p.s This week's Random Tuesdays was published on a Thursday since Tuesday was an exceptionally busy day for me. I graduated (Master of Arts, yay) and the deadline to submit my PhD research proposal was also that day. I don't expect to get into the PhD program, since I wrote my very incomplete proposal in two weeks, but I decided to give it a try anyways :)
Lähettänyt Sugar osoitteessa 1:43 PM 2 comments: 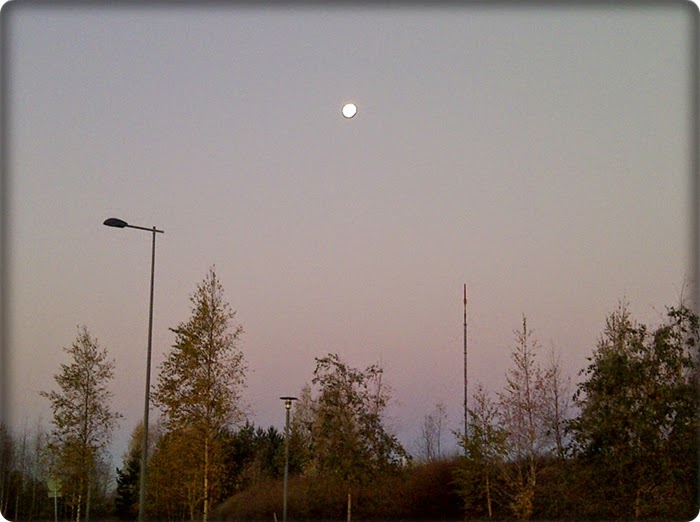 The Moon in Southern Finland, 2013

Nothing new on the immigration front, sad to say. It's been over 11 months and so far we've only received NOA1 (notification that they received our petition to apply) and NOA2 (notification that they approved our petition to apply). Now our case is in a storage at the National Visa Center and will remain there for the unforeseeable future, probably for at least a month, until someone checks them out and gives us a case number. After that the more complex paper work part of the visa process begins. Both the petitioner (husband) and beneficiary (me) will have to send our own individual packages with original documents. And of course we have to pay more. After NVC has (hopefully) approved our documents and evidence, they will ship them to the embassy of Helsinki. Then we will get an interview date. It should take 2-3 months before they even bother sending our paperwork to Finland, if they ever get to actually checking it out. 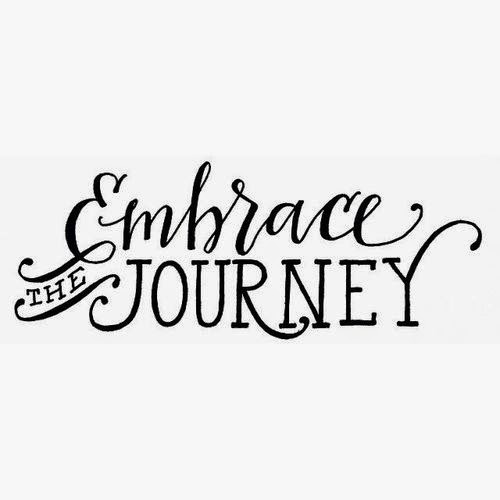 All in all I estimate that our path to IR-1 spousal visa (10 year "green card") will take us a year and four months. That is, if we're lucky. And in the end they might still deny me the visa. Is immigrating to a country that has not really impressed me lately really worth all this time and money? I don't think so, but husband does.

Hope everyone is having a sunny weekend! 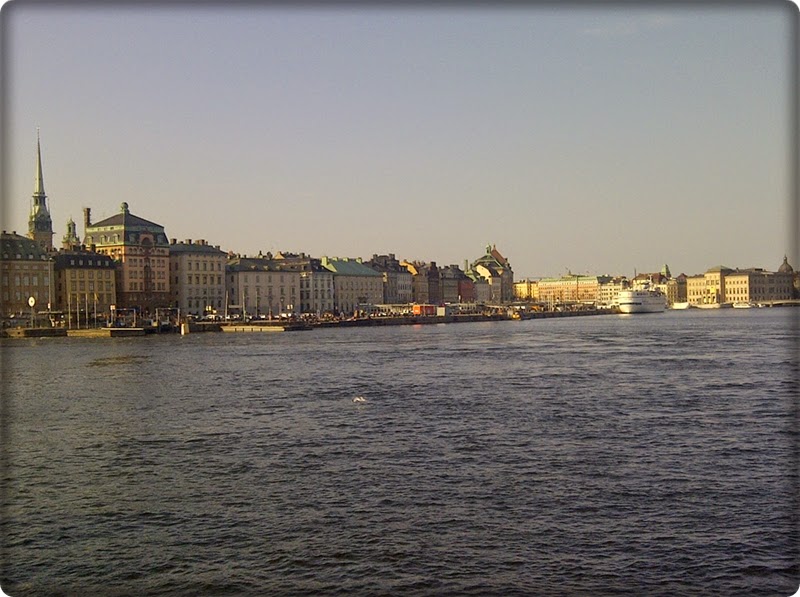 Lähettänyt Sugar osoitteessa 9:57 AM No comments: