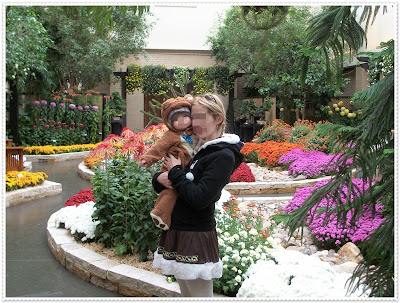 Halloween 2010 at the Omaha Botanical Garden. I absolutely love Halloween and always dress up! Last year I got to dress our lil man for the first time and decided on the traditional teddy bear costume :) I was an ice princess and my husband was Indiana Jones. We went trick or treating at the Omaha Botanical Garden, since they organized a Halloween event for kids. It was so beautiful and a lot of fun!

p.s I apologize for the ridiculous blurring :( I couldn't find a photo that didn't show our faces
Lähettänyt Sugar osoitteessa 4:29 AM No comments:

The blog has been a bit quiet lately as I ruptured a disc and haven't been able to sit all that much :( I'm super-bummed since I should be packing up boxes and preparing for the move, but I'm in too much pain to do that. Also, I promised to host a baby-Halloween party next week, I really should be making decorations for that. I'm looking forward to the weekend so I can finally rest, since my husband will be home and taking care of our lil man.

I've been able to watch a lot of tv though and have found another tv-show I like: Revenge. I checked out the pilot, although it didn't seem like a show I would enjoy and found myself really liking it! Maybe it's the bad back, but I'm hooked!

Lähettänyt Sugar osoitteessa 4:15 AM No comments: 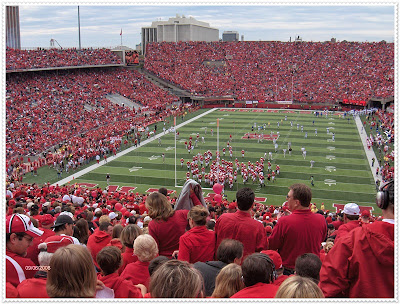 Huskerfever! I went to see Nebraska Cornhuskers play at the Memorial Stadium in 2008, when I was a graduate student at UNL. The stadium fits over 80 000 people and I think they were sold out on that day, like they usually are. Go Big Red! :)

Lähettänyt Sugar osoitteessa 6:44 AM No comments:

Ballet at the Opera House

Best husband ever suprised me with tickets to go see Cinderella at the Finnish National Ballet at the Opera in Helsinki! I love ballet and Cinderella is just the perfect story. This time it was a bit more tragic than usual, the ending was definitely not the happy "Disney ending". Dancers were breathtaking though and the experience just amazing. 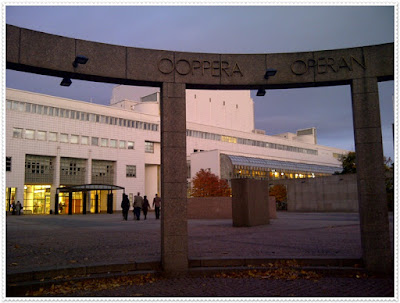 Outside the Finnish National Opera 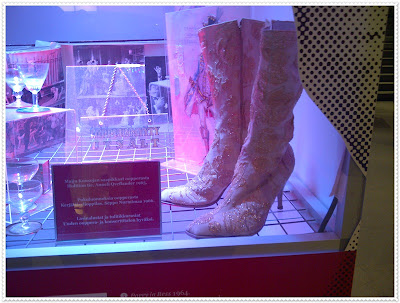 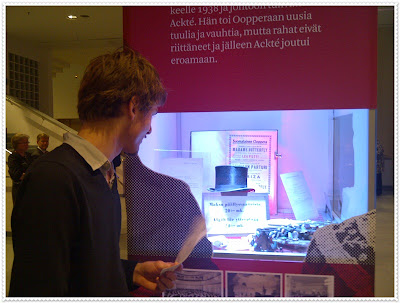 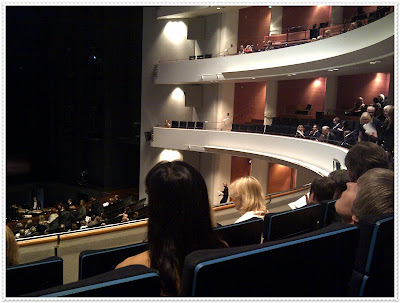 Our seats were on the first balcony, so we had a pretty good view. Photographing the performance was not allowed, so here's the audience :) 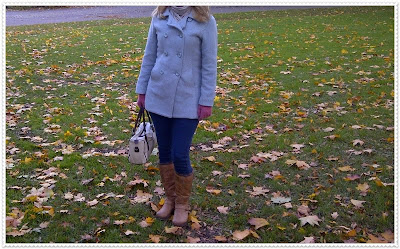 Here's what I wore :D I don't really dress super-fashionably; I can't afford to/don't have time to go shopping all that often. I'm a jeans and a t-shirt kind of girl :) What I'm wearing is Target baby blue jacket, H&M Sqin jeans and Bare Traps Paulette boots. The boots are just about the comfiest thing I've ever worn! They have fake fur lining that's super soft and they're waterproof. The Target jacket, which I love, is kids size :D Here's a confession: I sometimes shop at the kids dept since the clothes are more affordable and they fit me just fine. I obviously don't buy pink My Little Pony shirts and other stuff that's clearly meant for little girls, but they often have the same stuff as the adult section. Anyone else shop at the kids section? I hope I'm not the only one :)

We signed the papers for our new home yesterday and will be moving next month, exciting! Although the new place isn't exactly our dream home, it'll be just fine for our current financial/occupational situation. I'll post some photos of the place as soon as we get the keys.

In the mean time, here are some photos of Lisa Vanderpump's home (she's in one of those Real housewives shows, I don't really know more about her) in Beverly Hills. I really love how she's had the place done and would love to have something similar someday: 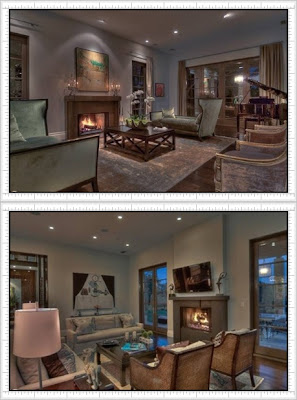 Love the cozy feeling of these living rooms 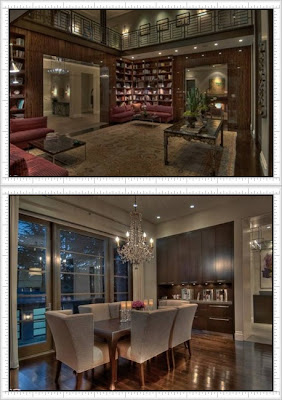 The library is my favorite, but I also like the casual feeling of the dining area. 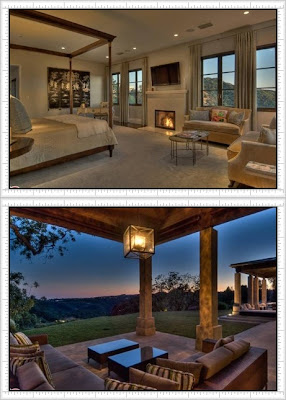 Bedroom and patio, both are just gorgeous!

Here's a bit more realistic wish :) I saw this furniture group in Nebraska Furniture Mart and loved it! It's really affordable, too, so we'll probably end up getting something like this once we figure out where we'll settle: 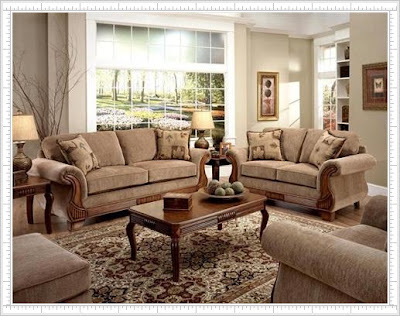 We haven't really spent any money on furniture yet, and I think we'll just use mostly what we already have to decorate the new place. One thing I'm really excited about is the fact that the new place has room for a dishwasher :D Our current apartment does not, and since I absolutely hate dish-washing, my husband has been hand-washing our dishes, poor thing.

What do you think of Lisa Vanderpump's home? I think it's pretty down to Earth for a reality starlet, it even looks home-y!

Lähettänyt Sugar osoitteessa 5:53 AM No comments: 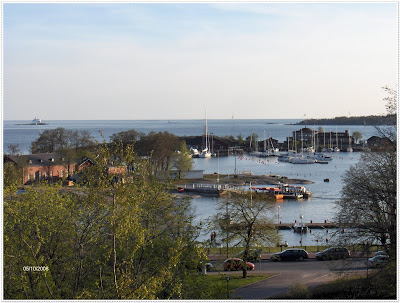 Baltic sea, Helsinki 2008. When living abroad, I usually come home to Finland every summer to visit. This photo was taken summer of 2008 in Kaivopuisto park in Helsinki. One of the things I love about Helsinki is the parks and especially the sea. It's the capital, but yet has a lot of green areas to enjoy. The day the photo was taken, I met up with some international friends, whom I knew through an exchange program, to have a picnic and play games. Fun day :)

Lähettänyt Sugar osoitteessa 9:54 AM No comments:

Where corn does grow...

If you've heard the song "Where corn don't grow" by Travis Tritt or Waylon Jennings, then you know what I'm talking about:) If you don't know the song here's Waylon Jennings

We're getting married in the corn country and here's a map where: 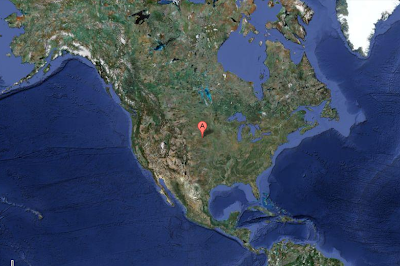 Pretty much in the middle of nowhere. 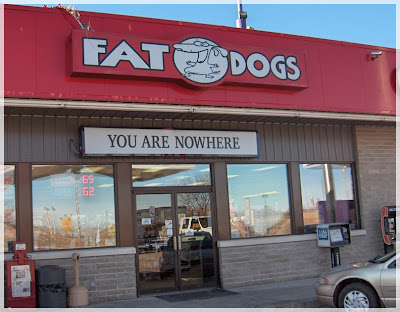 Somewhere in Nebraska, gotta love the Midwestern sense of humor :) My husband tells me they also have Middle of Nowhere Carnival Days in July, should probably visit :)

p.s these short entries continue as I'm still not feeling my best, darn sniffles!
Lähettänyt Sugar osoitteessa 2:37 AM No comments:

We've been living in a teenyweeny (58m2) one bedroom apartment ever since we moved to Finland and I have to say it's been pretty tough sleeping in the same room with a toddler who is an extremely loud sleeper :D He babbles in his sleep aaaaall night.

We've been looking for a two bedroom place for a while and have already turned down two offers (the first one was really shabby and the second one was a first floor apartment), but luckily third time was the charm and we got offered a place that was just what we wanted. It's a two floor, two bedroom semi-detached condo (paritalo) with nice little backyard. 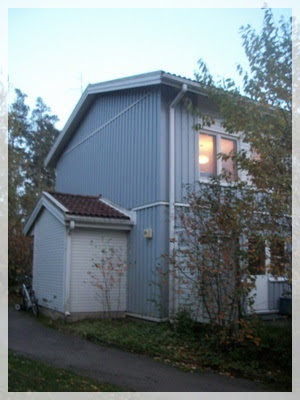 We'll be moving next month, so we have a whole lot of packing to be done this month, which I can't say I'm looking forward to, but I'm really excited about the place! :)

Now if I could only get rid of the sniffles...

We are planning a Christmas-y theme for our second wedding, since the event will be in December. The wedding will be held at my husband's hometown, so my sister-in-law is doing most of the planning/purchasing etc, she is a gem! She sent me some inspirational photos the other day and I thought I'd share them: 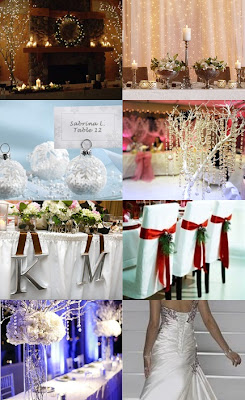 I think they look great! I love the garlands and the lights, I would love it if our wedding would have this warm country Christmas feeling to it without going overboard on the Santa stuff like I usually do :) I can't wait to see what the reception hall will look like!

p.s I have the worst case of sniffles, hence the short post :)

edit. Here's what our wedding turned out to be like: Our Christmas - Winter Wonderland Wedding :)
Lähettänyt Sugar osoitteessa 5:58 AM No comments:

I got an idea while I was reading The Expat Wife; she has this thing called "Silent Sunday" on her blog where she only posts a photo. I think I've seen them elsewhere too. That got me thinking, if I could do something similar and here's my version of it: Random Tuesdays! I'll be posting a photo from my life every Tuesday with a short caption (I'm not very good with silence). And here's the first Random Tuesday photo: 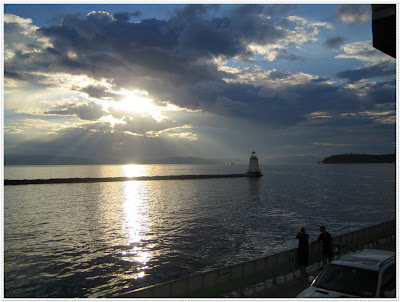 Lake Champlain, Vermont 2005. I lived in Vermont for a few years and every time I got homesick I went to Lake Champlain; it reminded me of Finland :)

Lähettänyt Sugar osoitteessa 6:02 AM No comments:

We had a green apple theme on our first wedding, which I thought worked out pretty well. We got lots of compliments about it, but then again who tells the bride and groom their decorations sucked ;)

Our wedding reception was held at a seurantalo, which is kind of a rural community house. They usually have dances, theater perfomances and other community events there. This particular seurantalo was built in the early 1920s and the interior fit our theme perfectly. 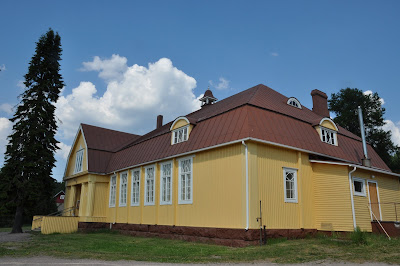 Here's the interior, we had already moved the tables and had started to decorate the hall: 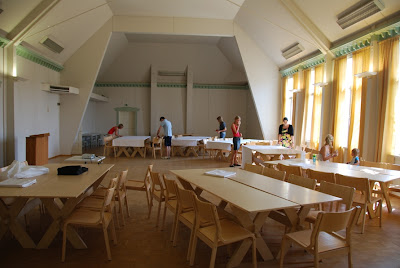 and here's the almost decorated hall: 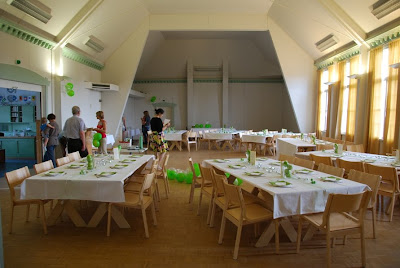 Our budget was super-small, about 10% of my brother's wedding budget, so we had to really pick and choose where we spent our money. In order to save money, we had to give up on getting floral centerpieces on the tables. Instead we went with fruits, we bought several boxes of green apples from the wholesale place and used those in cheap Ikea vases with some colored sand on the bottom. Since our theme was green apples this worked out pretty well :) 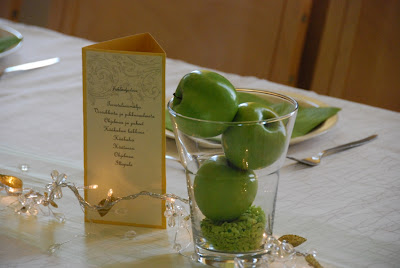 Vase centerpieces with the program/menu. We bought gold cardstock from Tiimari and printed the menus on cream colored paper (also from Tiimari) and glued :) Each table also had a led light string with some gold leaves and crystals. We got them cheap from Kodin ykkonen, since they were on sale. Ours had to be plugged in, but I would recommend getting the battery operated ones, no need to worry about extension cords etc. 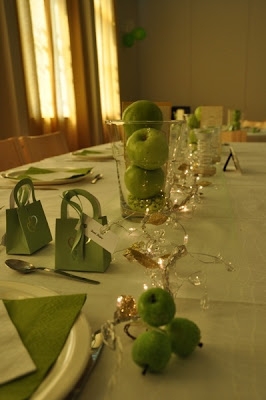 Here's another look at our table decorations, I think I posted this already earlier in the blog. Each end of the table had three miniature green apples. I found them like a week before the wedding on sale in Tiimari, but I think they worked out great. The napkins were from Ikea, again really affordable. 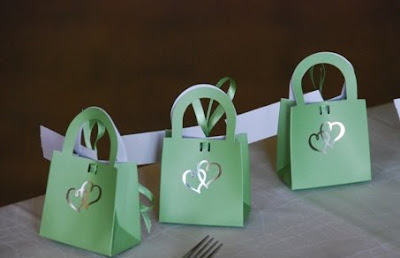 The Wilton Green Sweetheart wedding favors/place cards also fit out theme. We got them from Walmart.com 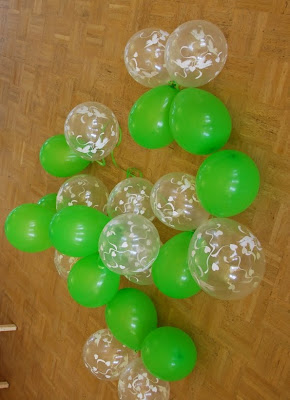 We also got some color themed balloons, another great idea if you're operating on a small budget. We got ours from Amazon.com and they were really affordable. 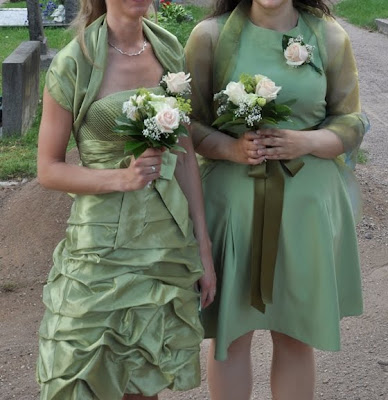 My amazing bridesmaids (I had three) also wore our colors :) The guys wore matching ties. 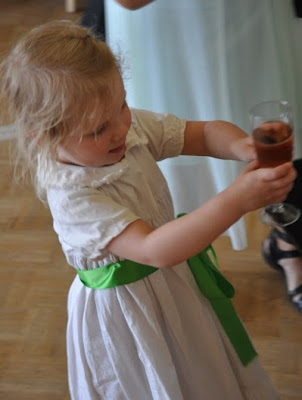 And flower girls (there were three of them as well) had a matching sash :) 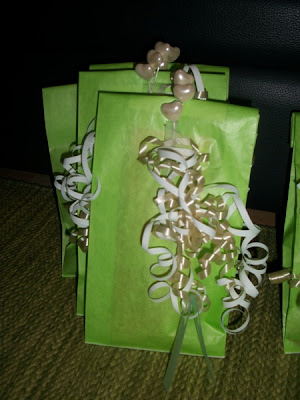 I also got some thank you-presents for our bridal party and packaged them in green to fit the theme :) All supplies were from Tiimari.

So the green apple theme was a success, at least I was pretty happy about how it turned out! We'll see what the classy christmas/winter wonderland theme will turn out :)