The U.S immigration process is  both laborious and expensive. A seemingly easy case of getting a spousal visa takes forever, and ever. We were thinking we might be able to head over to the U.S early next year, but now it seems that was too optimistic of an approach.

It's been almost four months since we sent our I-130 to USCIS. Nothing has been done to our case, even though we were initially told cases filed overseas (U.S citizen living abroad) usually get NOA2 in 60 days or so, since there no longer is a DCF option. That turned out to be completely untrue and the USCIS customer service has given us a whole lot of other misinformation as well. I'm not surprised.

Our case is now in Overland Park, KS and has been there since May. Nothing has been done about it and nothing will be done for another month or so at least, since Overland Park division will not open until the end of September the earliest. So, they sent our case to a place that is not even open yet. When they eventually do open (no one knows when, one customer representative seemed to think it's open, but its not),  they have several tens of thousands of cases waiting to be processed. I'm under no illusion that our case will be processed anytime soon. 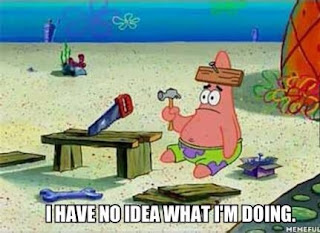 How I see their customer service... (from weheartit.com)

Now this really puts a damper on our plans, as we originally thought they would maybe process our case within 9-12 months, so that we could move in the spring. That is not going to happen.

I know the immigration process is nothing personal, and I know I'm just another unwanted immigrant among hundreds of thousands of others. But I have to say that the fact that they sent our case to a place that's not even open, knowing that they won't do anything about it for at least another 5 months, kinda makes me wonder if we should even bother moving.  Our plan was to stay for 3 years and move back when little man goes to school, that won't really be possible if I get the visa next fall or later.

Oh yeah, I was told to stay optimistic and just wait patiently. Thanks, I'll do that ;)

Argh, how frustrating! Why on earth did they have to get rid of DCF?? Is it an option for you to arrive on a tourist visa and continue the application here? Well, if you plan to work then certainly not.

My immigration has been so easy so far - including filing just before Haiti earthquake which I heard bumped up fiancé visa processing times 6-12 months - that I guess it was time for some adversity. I just finally submitted paperwork for RFE (request for additional evidence) on my green card removal of conditions. We don't have the two big (Finnish) L's, laina ja lapsi, mortgage or a kid together, so now we can only hope what we submitted convinces them we are indeed truly madly deeply, not any other sort of married.

So in sum, commiseration galore.

That is really frustrating! I'm in a process of getting green card through employment and that process seems to be even longer. Right now they are processing applications from June 2010, so I have still long ways to go. Should I say Years to wait.

Sounds way too familiar! I waited my K1-visa for 10 months and green card (after we got married in the States) for almost 6 months. It was frustrating! I'm about to start my very last process and remove conditions on my green card. Hopefully that will be done before it's time to become a citizen :)

Pilvi, sure is! I don't understand why they got rid of DCF, I mean it was a way to get their own taxpayers faster back from abroad! Unfortunately if we want to do everything by the book (which we do) I have to wait in Finland for the duration of the IR1 process.

You were lucky that your process went so fast, but that's curious that you got a RFE! I wonder if we will too, who knows. Our "red flag" is that I'm older than my husband (OMG :D)

Ice princess, whoa, that's a really long wait for the green card! Hope it goes by faster than expected!

Veera, hope you get the conditions removed without a hassle! Seems like everything involving immigrant visas requires a lot patience :)

A letter to a congress man might help... or not, you never really know. My husband wrote one when my application process got delayed and he did contact the USCIS for us.

Pabe, it's certainly worth the shot! Pretty sure this congressman doesn't have to do this sort of stuff too often :)