Babies! - what was it like to have one in the United States :) pt III - classes and hospital + a baby shower

Before I got pregnant, I didn't really know much about babies. I'd never even held one in my whole life! So I figured it was time to educate myself by taking a couple of classes. My insurance covered a birthing class and baby care class. I think they normally cost like $65/class. My insurance also covered a baby car seat fitting in which they also gave a car seat for the car (!). Besides these two classes I also attended an 8-week baby care class organized by the local anti-abortion organization out of curiosity (I'm very pro-choice by the way, but not pro-abortion).

I did not learn that much at the anti-abortion baby care class, but I got to meet other moms, most of them very low income women. Most of us were in our 20s, I assume, but there was also this 12-14 year old girl there, with her mom. I have to admit that I felt really bad for her, whoever got her pregnant should be jailed, she seemed so fragile. Good thing she had a very supportive mother. A couple of the moms seemed to be there because some legal trouble had required them to, they were not first time moms. Husband (then boyfriend) and I found this class to be very eye opening, we really started considering ourselves privileged to be able to have such a secure life. The class discussed raising children, financial matters and the organization also provided the moms-to-be with baby furniture, baby clothes, diapers etc. Despite being very critical about these anti-abortion organizations, this one seemed to care about the well-being of the babies after they were born as well. The lady that ran the class was very sympathetic and understanding of the moms situations. She really cared for the women and tried to help them in every way she could.

The paid classes had higher income parents and the low income parents were noticeable absent. I think my husband was one of the few guys attending the free classes at the organization, but the paid classes had both parents there. The childbirth class was an express one, 16 hours of childbirth education in one weekend! They had longer ones too, but husband's work schedule didn't allow us to take one of those. This express one was really enough for us, since I never did go through labor. Basically we introduced everyone, watched dvds (really gross ones I have to say haha) and practiced lamaze breathing and other relaxation techniques. None of this ever came in handy, since I ended up having that emergency c-section. The only thing this class did, was make really scared of childbirth :D The baby care class was more useful, we learned a lot about caring for the baby and also baby CPR, which I found very important to learn about. The class was attended by both parents and we got our designated baby dolls to practice with :) We also got this rather good booklet about baby care, which I read afterwards several times. Both of these classes were held at the Catholic hospital, but religion was never mentioned.

The hospital also had free arranged tours for parents-to-be, so we attended one. I didn't really need to because I had already been there so many times, but it was good for husband to see the place. A lot of the parents attending were there to shop for a hospital as in they were trying to decide, which hospital to have their baby in. This was kind of a sales pitch for the hospital staff and they gave all sorts of brochures praising the hospital and a thank you gift (a photo frame) for coming to check out the hospital. The hospital's baby center was really nice and
home-y. The birthing rooms had a jacuzzi, a tv, a couch, recliners etc. and lots of room to walk around. There was a room service you could call to order foods and also a kitchen for the dads to snack from (it had coffee, soft drinks, milk, ice cream, jello, crackers, soups etc.) There were separate wings for birthing rooms and recovery rooms. All of them were private, so no one had to share a room at any point. The corridors were quiet, in fact I never saw or heard other moms while I was a patient in there. I just saw their babies through the nursery window :)

Since I didn't know much about babies in general, I had never been to a baby shower either. When my friends suggested they'd plan one for me, I was a little hesitant. I don't like being the center of attention and I didn't really know what they were about. Turns out the baby shower was a lot of fun! We played different games, for example a baby food quiz, and enjoyed good foods. The baby also got a ton of presents, including toys, clothes and diapers. I think moms-to-be have baby showers in Finland these days as well, although none of my mommy-friends have chosen to have one. 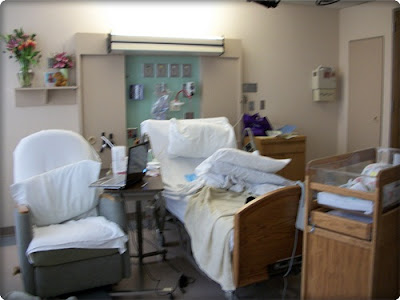 Our room at the hospital 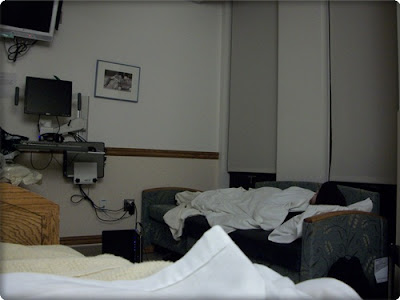 Tired husband sleeping on the couch :)